Am I alone when I write? 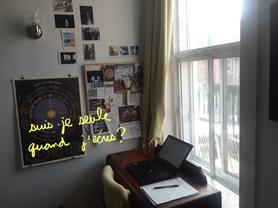 ‘What's that?
A little green fry or a mushroomy one?
Two lashed ovaries with prosciutto?
How long did she womb it, the feathery one?
Three days and four nights?’

Alone to not-alone as silence to conversation. Conversation implies company. Do I have company when I write? I think I wish I didn't. I wish there was no company at all, just myself and some paper.

I think I think that would make me a better writer. It wouldn't. It doesn't. It would just be lazier and easier.

(That only suits for the writing part, of course. The bit-after-writing, the bit when I would like you to listen to what I've written, thankyouverymuch, I would like to be as not-alone as possible and have many people around who will support and welly me up with nice words. That's why writers are selfish fuckers, require much indulgence, and don't make for very reliable friends.)

Too much of your own company is crazy-making after a while. We walk the same track round and round. Need someone else to come in like a meteorite, knock us out of the field.

The last thing I wrote was about tongues. I think we're in a time where we're all very fond of the sound of our own tongues waggling. I read something about St Antony, patron saint of lost things. When he died, his tongue refused to rot. They dug him up thirty years after his death and his tongue was still there, all fleshy and lolling about – presumably – in his dry bone skull. What a bloody awful thing. Imagine if our tongues never died. Still yabbering away for all eternity.

I read that, and I was angry about all us yabbering away, all the time, and I wanted to go and spend some time with Samuel Beckett. I've been thinking about Beckett. I think he'd have enjoyed Quebec. The irrepressible contradictions of a place trying to be two, three, many things at once. Everyone talking in parallel tracks all the time. The whiff of exile. No resolution. Aye, I think he'd have enjoyed this.

I've been here for just over three years now, and it's done strange things to my tongue. It feels out of shape. I'm long from home, and the tongue is always rooted in the place you were born. Get too far for too long, the tongue gets all stretched and pinced, stuck at the front of the mouth. That's the exciting bit of the tongue, the tip. That's where you can flirt. Stick it out a bit, taste things. Be not-alone. But you need to roll it back once in a while. Give it a rest. Otherwise you forget how to wiggle it right. I'm tired of having to be careful in two languages here. I can't write careful. I need to and find some Irish/Northern Irish. The Irish fuck about with the English language in a way that is resistance and mischief in equal measure, and feels like going home.

‘Ah the banner
the banner of meat bleeding
on the silk of seas and the arctic flowers
that do not exist.’

Beckett's poetry is really Full Metal Beckett. A little goes a long way, without the distraction of characters to dilute it. If the plays are like being a room full of bits of Beckett, being alone with the poetry is like being on an incredibly intense first date. There may only ever be one. The man's charismatic, self-absorbed, in love with his own misery, hypochondriac, and fully aware of how clever he is. He's been having his own conversations for year - you're just one more member of the audience. It's not the most giving of relationships, but if you can take what you need from it and not lose yourself, you'll be alright.

It strikes that Beckett managed to get himself canonised as the patron saint of isolation. That iconic image of the big floating steely head. The women reduced to sandpits or footsteps or a mouth. Sure, Vladimir and Estragon have an iconic everlasting boy's club going on but even that's in the middle of nowhere. It's bollocks, of course – Beckett had galaxies orbiting round him, past, present, and future, as befitting a miserablist charismatic man styling as a sole isolated alone genius in the world. He pulled that one off beautifully.

But for all that. Look at the flippant joy of those syllables flapflopping about like fish out of water, only to please themselves. Read it out loud to yourself. Wouldn't it bring a smile to your face? Wouldn't it make ready you to go back out for company? Wouldn't it loosen the tongue?